Something we should’ve done right after we got here. That’s what we said to each other when we returned to our hotel. At our last day we had seen and eaten so many great things in different places. We wished we had some more time left to re-visit some of them. Sadly, by the time we write this we have already left Yogyakarta. It’s such a great town and we are sure we’ll revisit it.

When we arrived at the begin location of the tour we met our guide Kalika who was very fun and well spoken. She brought two “Becaks”, which are Indonesian versions of a tuktuk , with her. These things are powered by a motorcycle and will zoom you through traffic like nothing else. Very fun because you are sitting in the front and all you’ll see is cars and bikes coming at you. For the rest of the night, these were our means of transportation between all the food places. 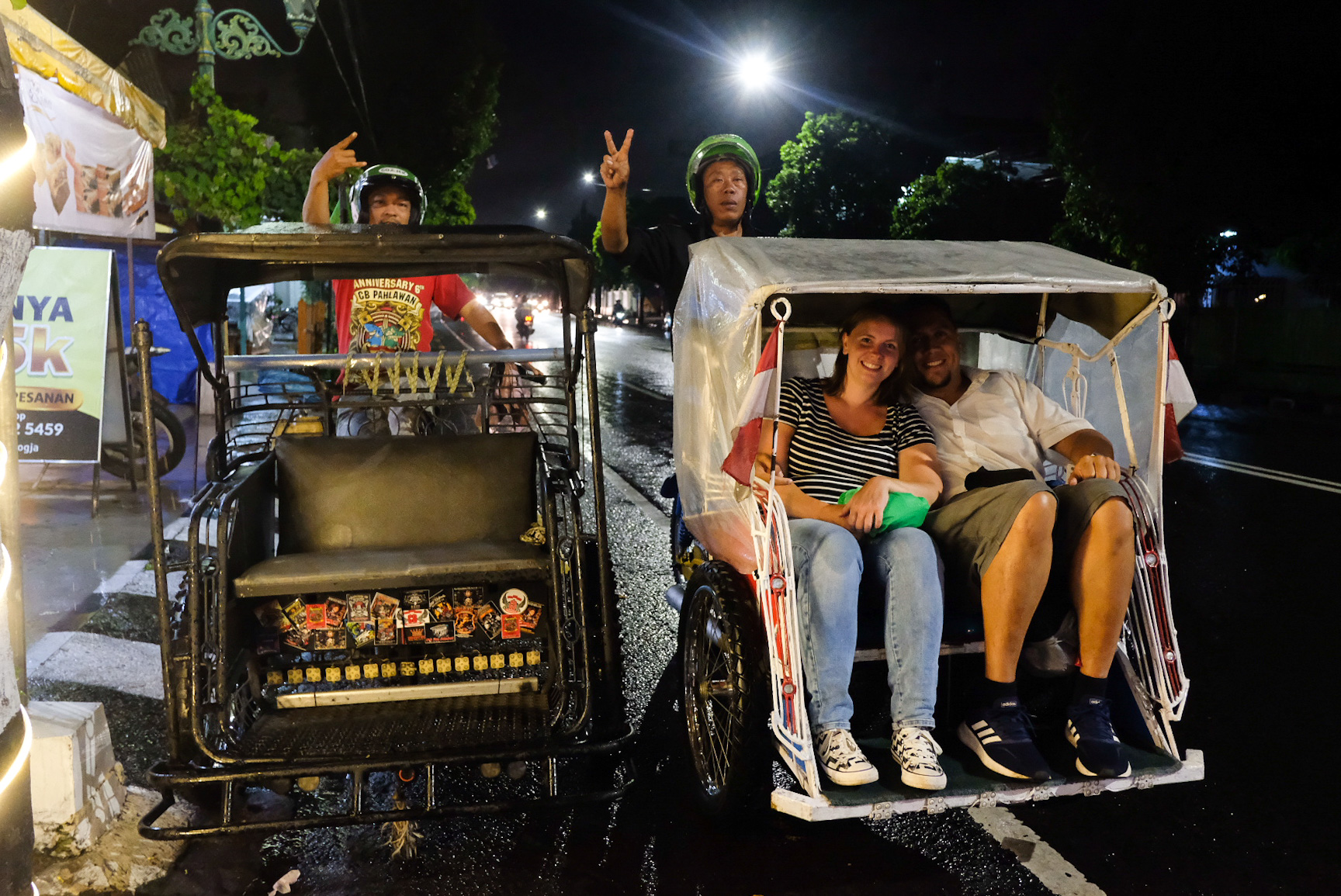 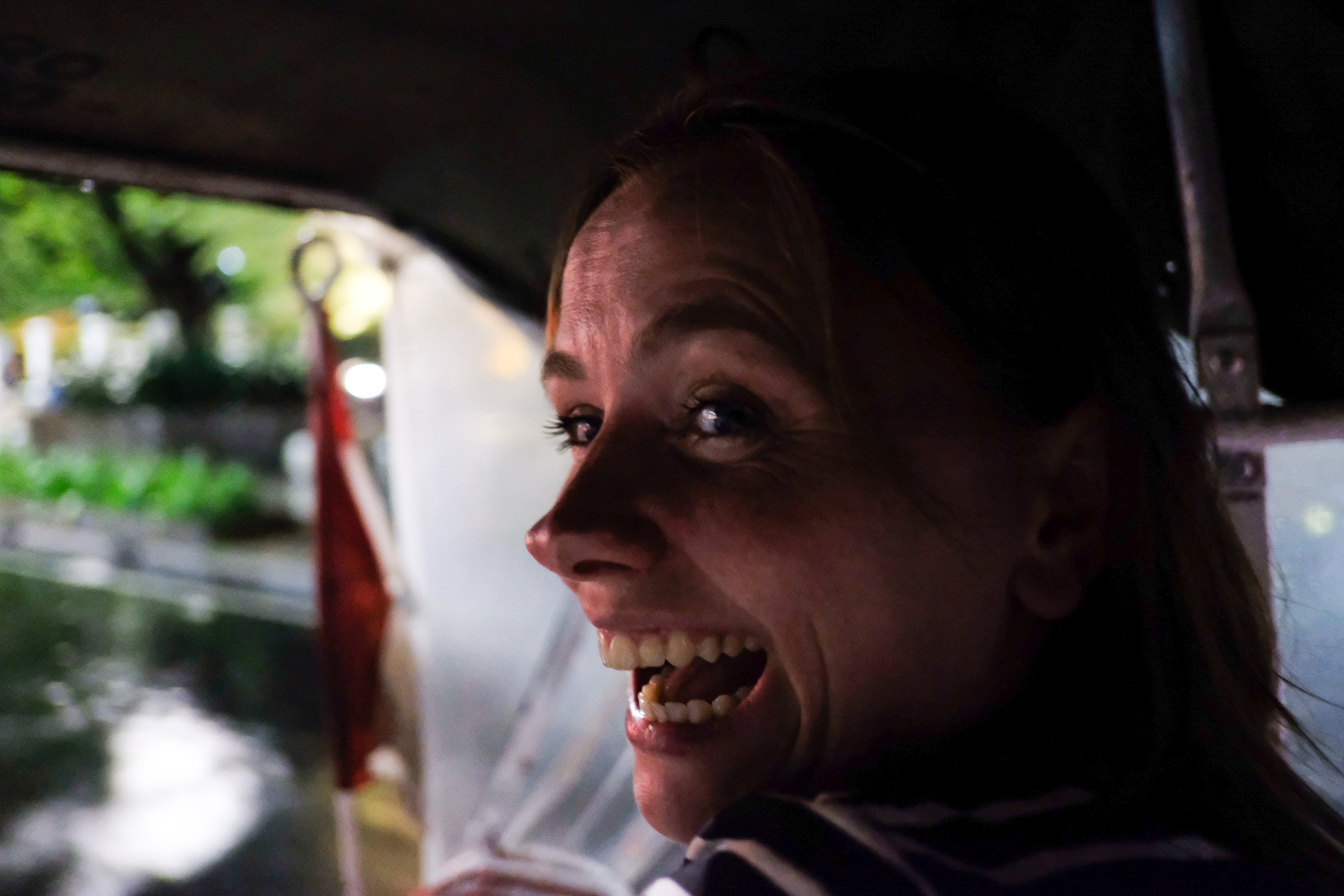 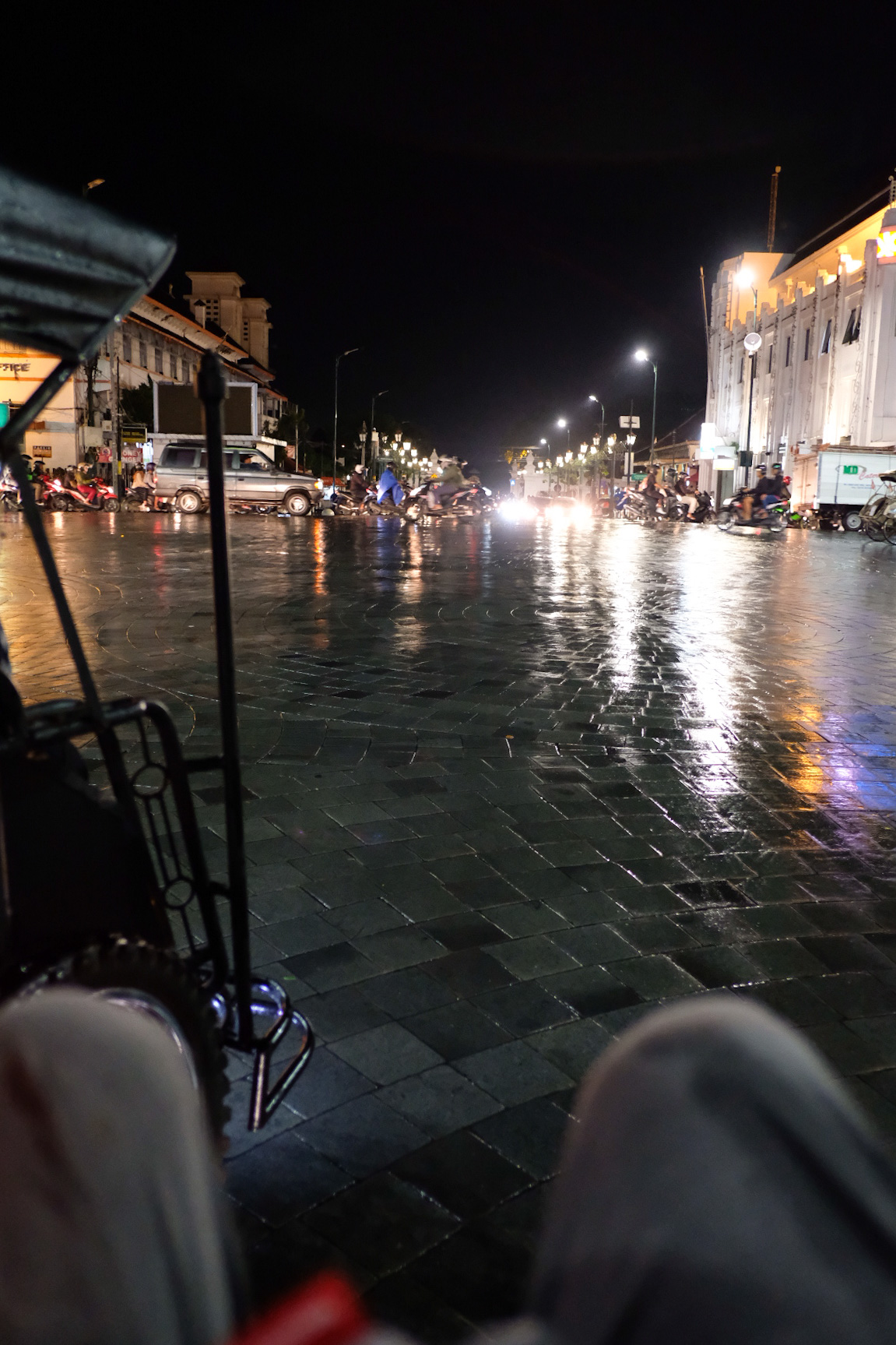 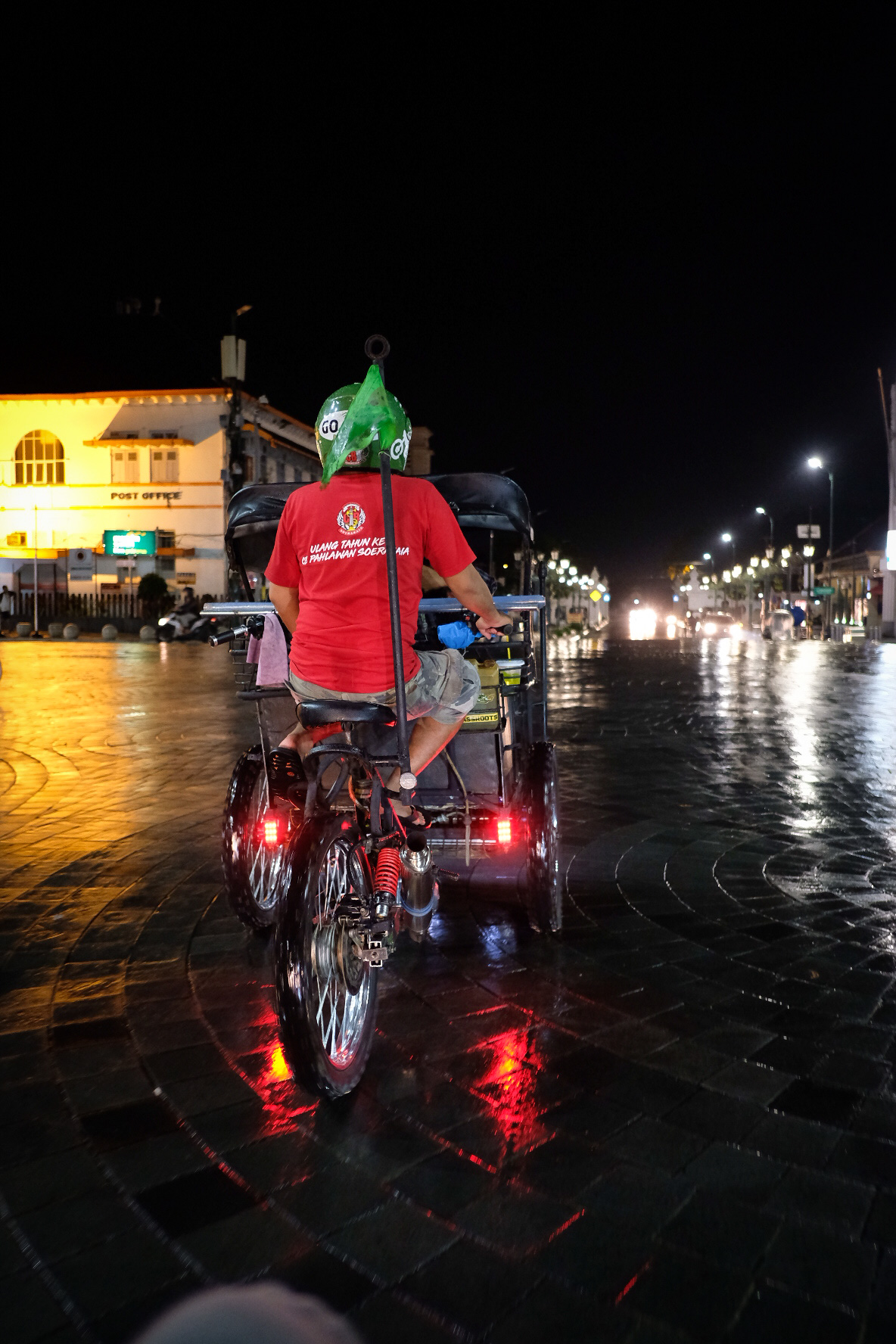 The tour started with a stall selling mainly sate skewers. From relatively “safe” picks like chicken, mushrooms or even chicken nuggets, to the more sinister looking chicken intestines and hearts. We tried several of them and they we all delicious, especially the intestines! This place also sold a very bizarre looking coffee called Kopi Joss, which means charcoal coffee. Yes, that’s exactly what it was, a cup of strong coffee with loads of sugar and a smoldering piece of wood charcoal floating in the middle. The coffee was great, but Tim did not taste any of the charcoal. 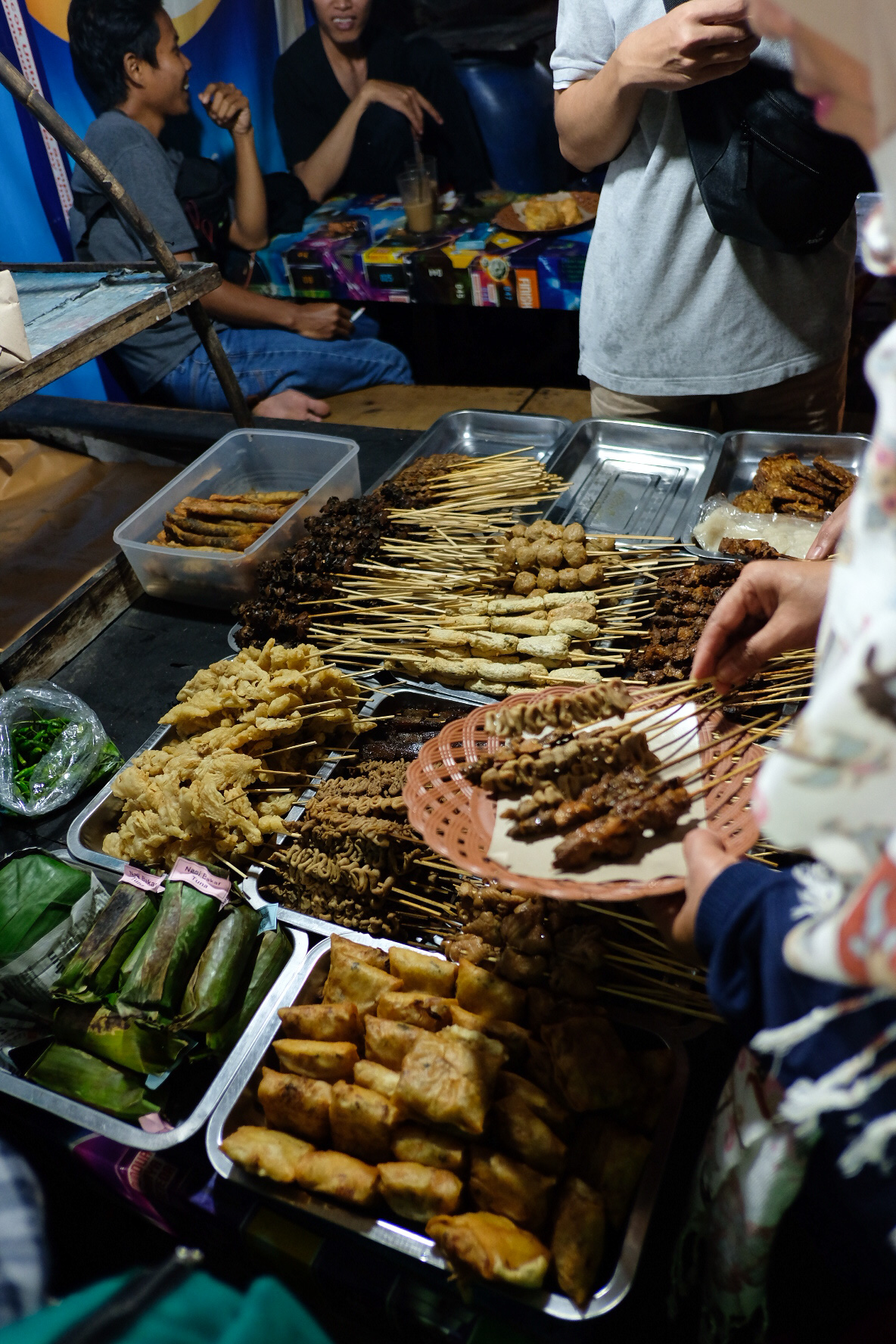 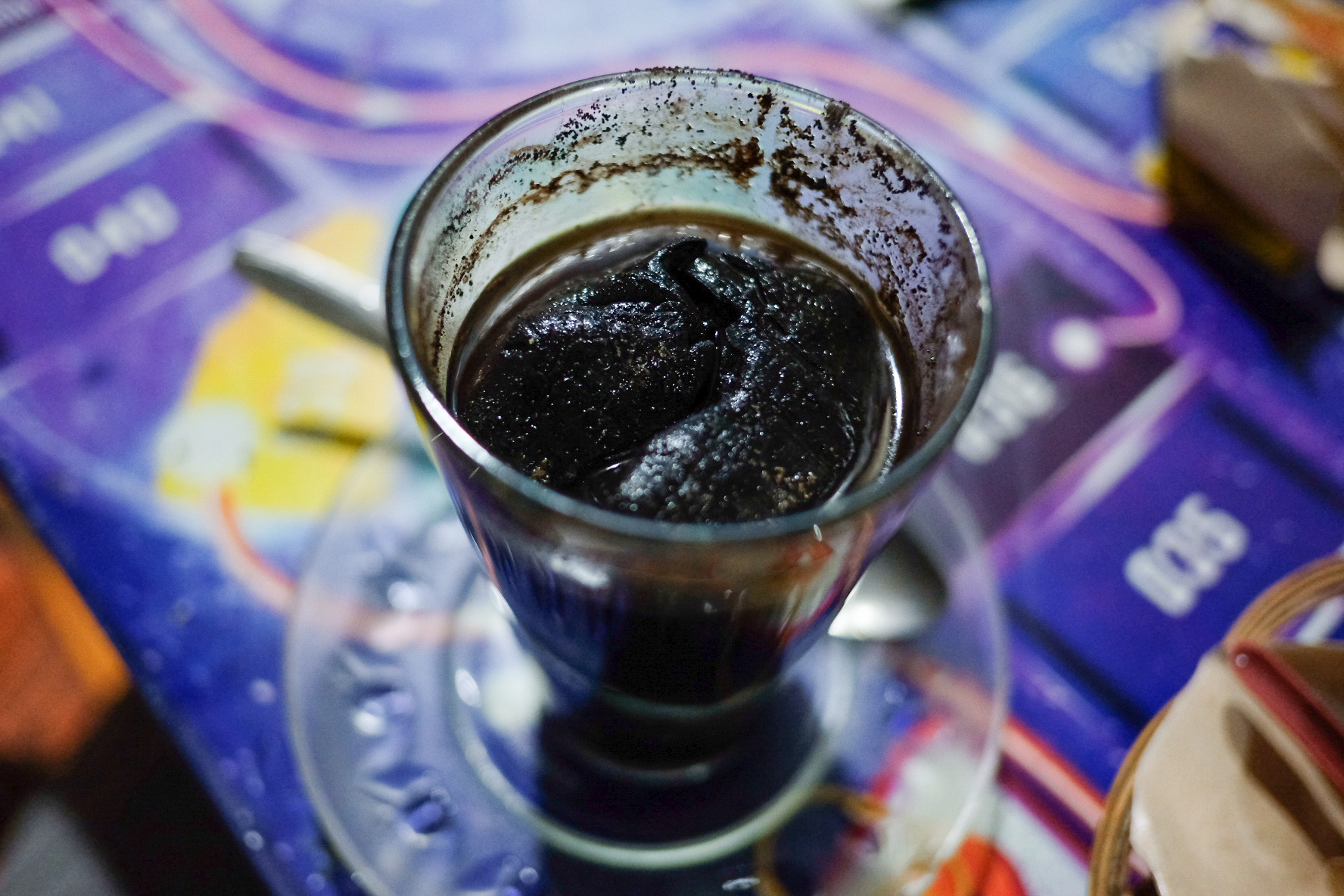 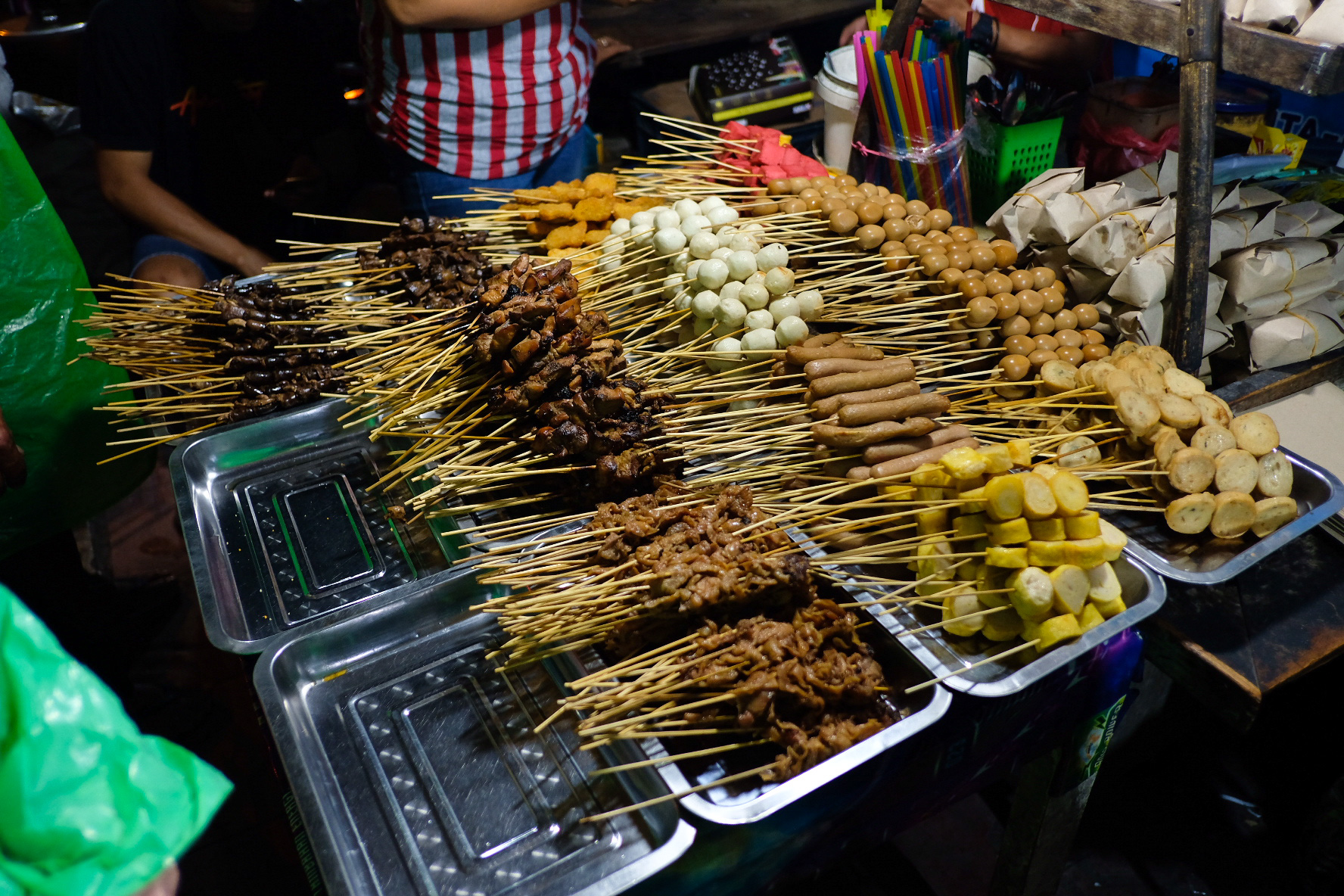 Next up was an amazing lumpia for which, during peak hours people will stand in line for over 30 minutes. We could see and taste why, it was the best lumpia we have ever had. Also close by was a stall selling traditional Indonesian sweet snacks. These are not unknown to us as we’ve eaten them before in the Netherlands but not nearly as good as these. 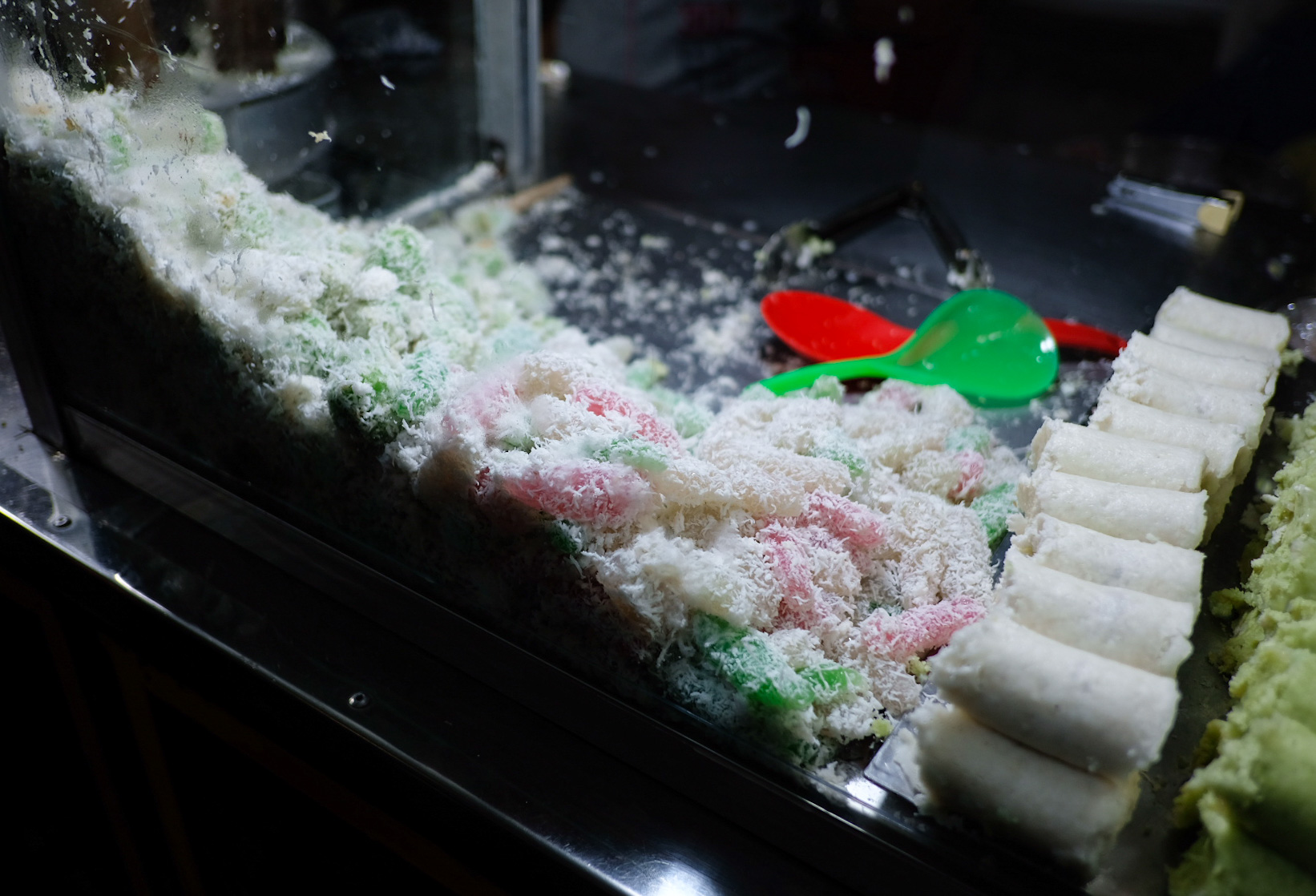 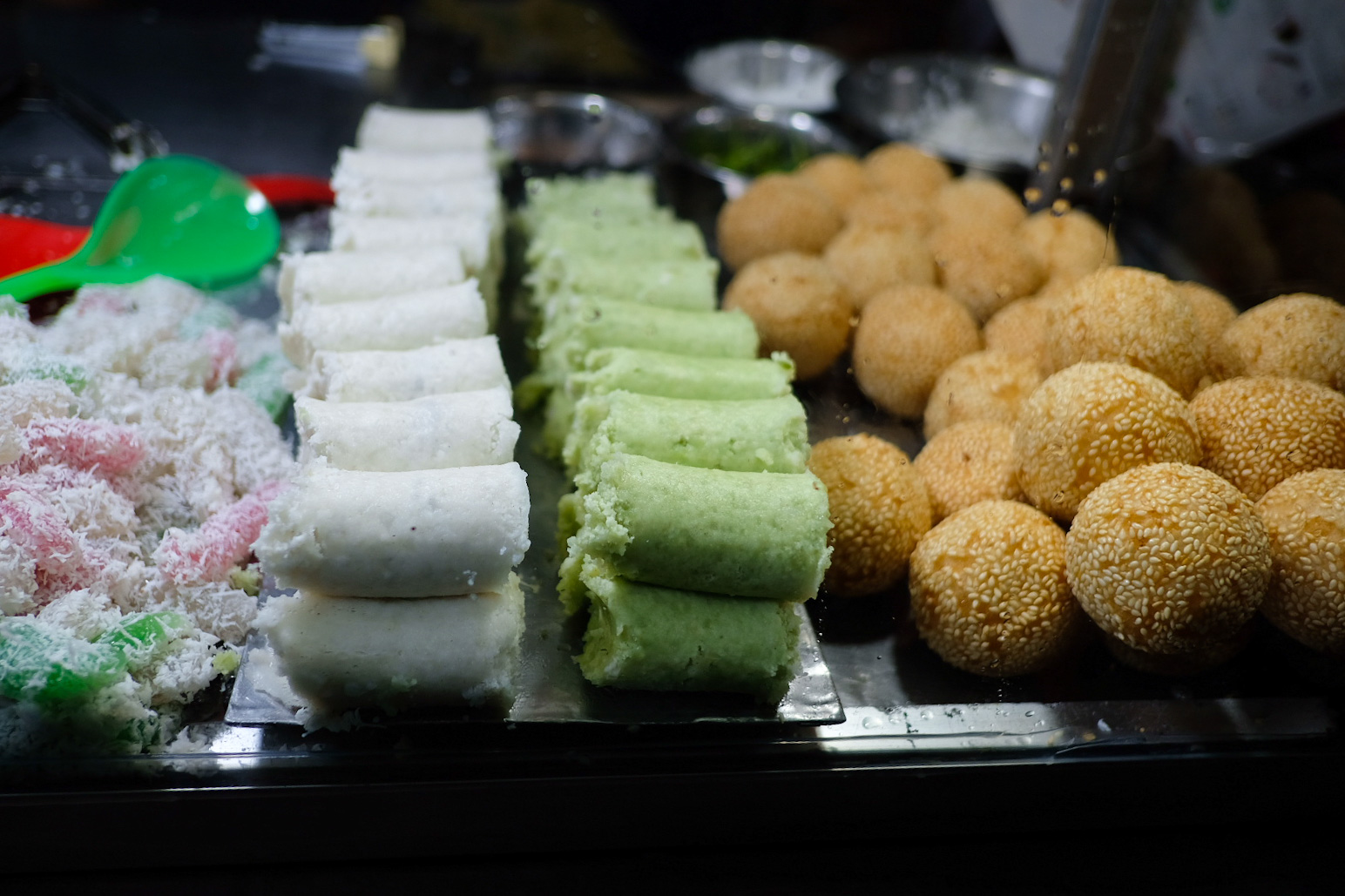 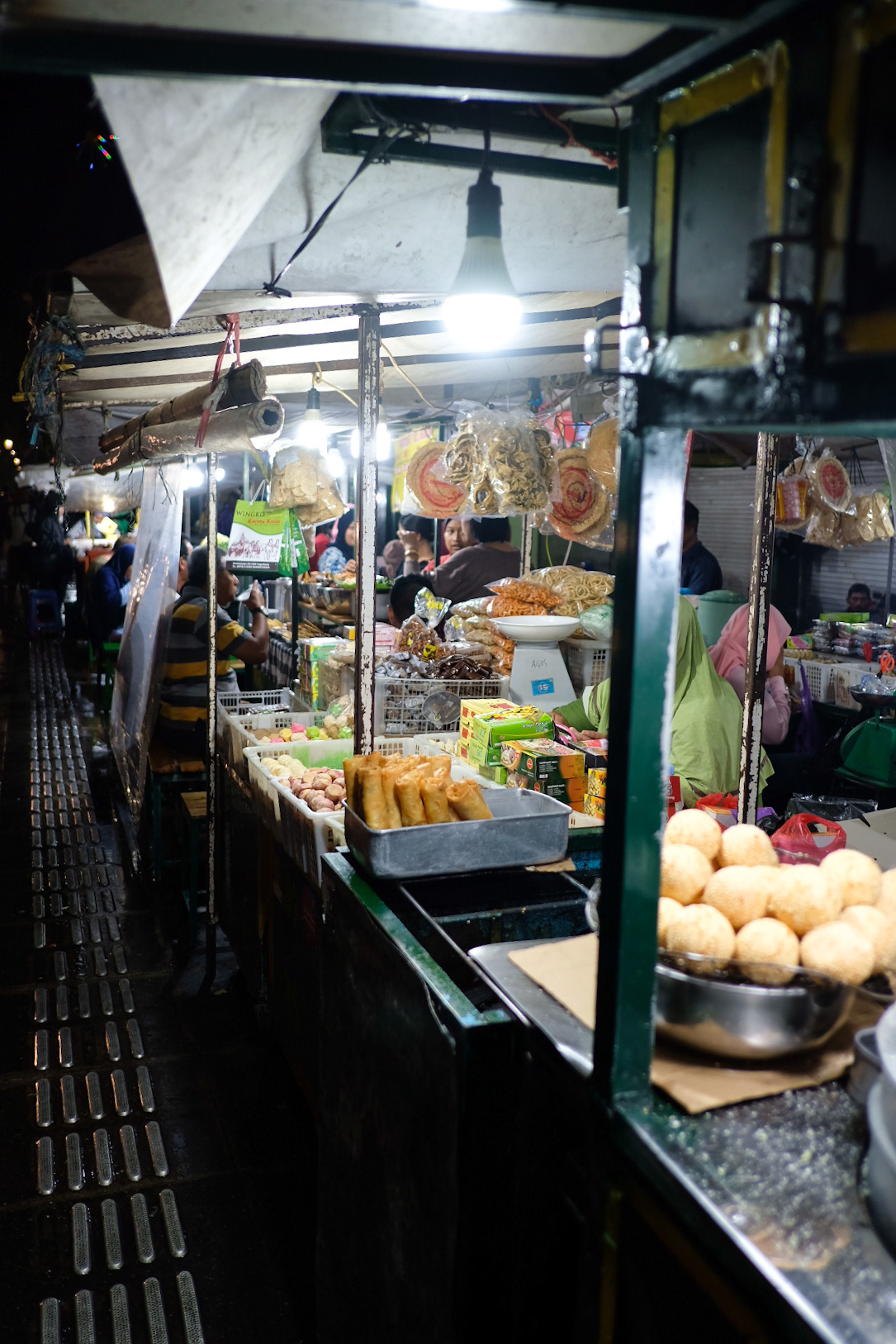 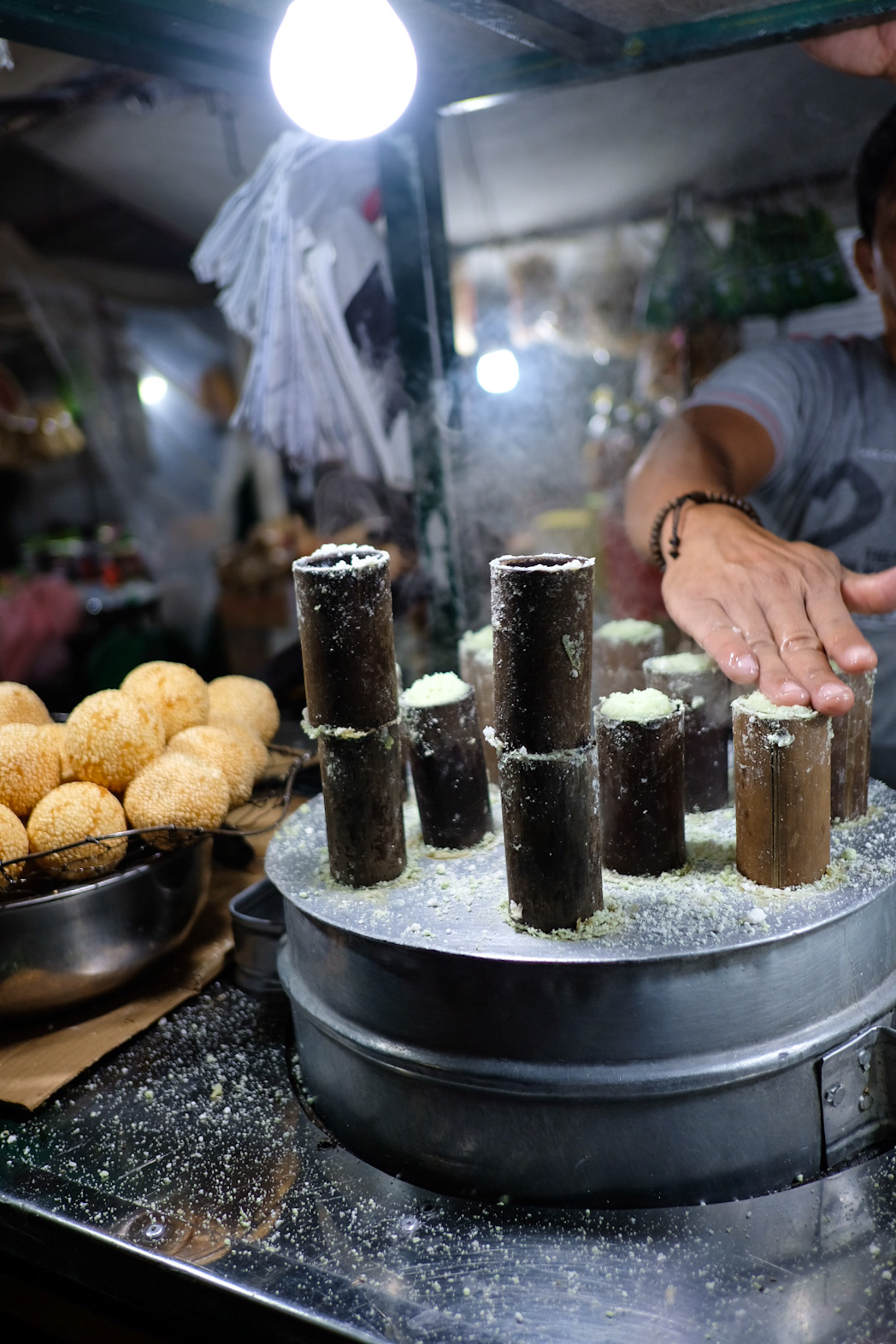 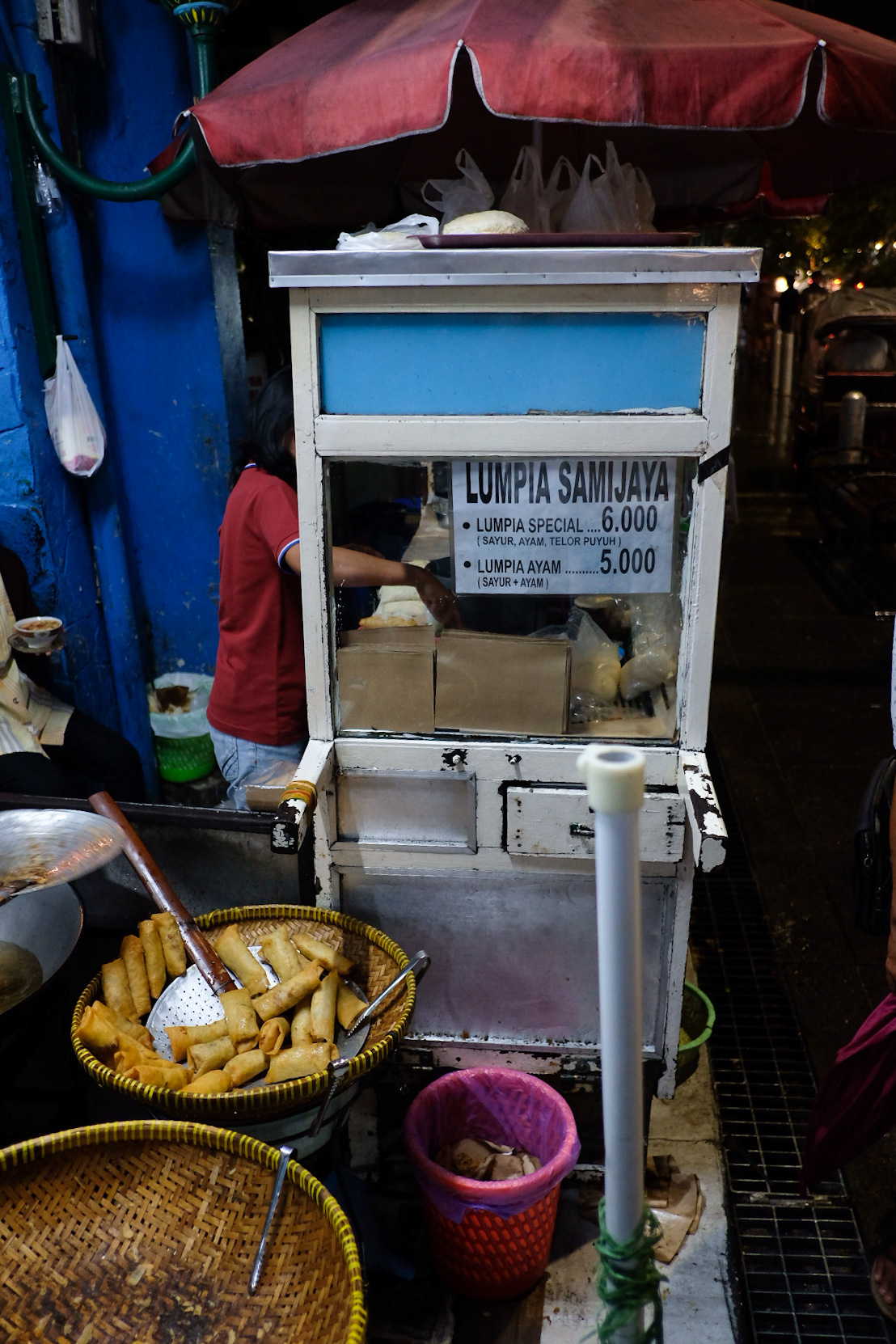 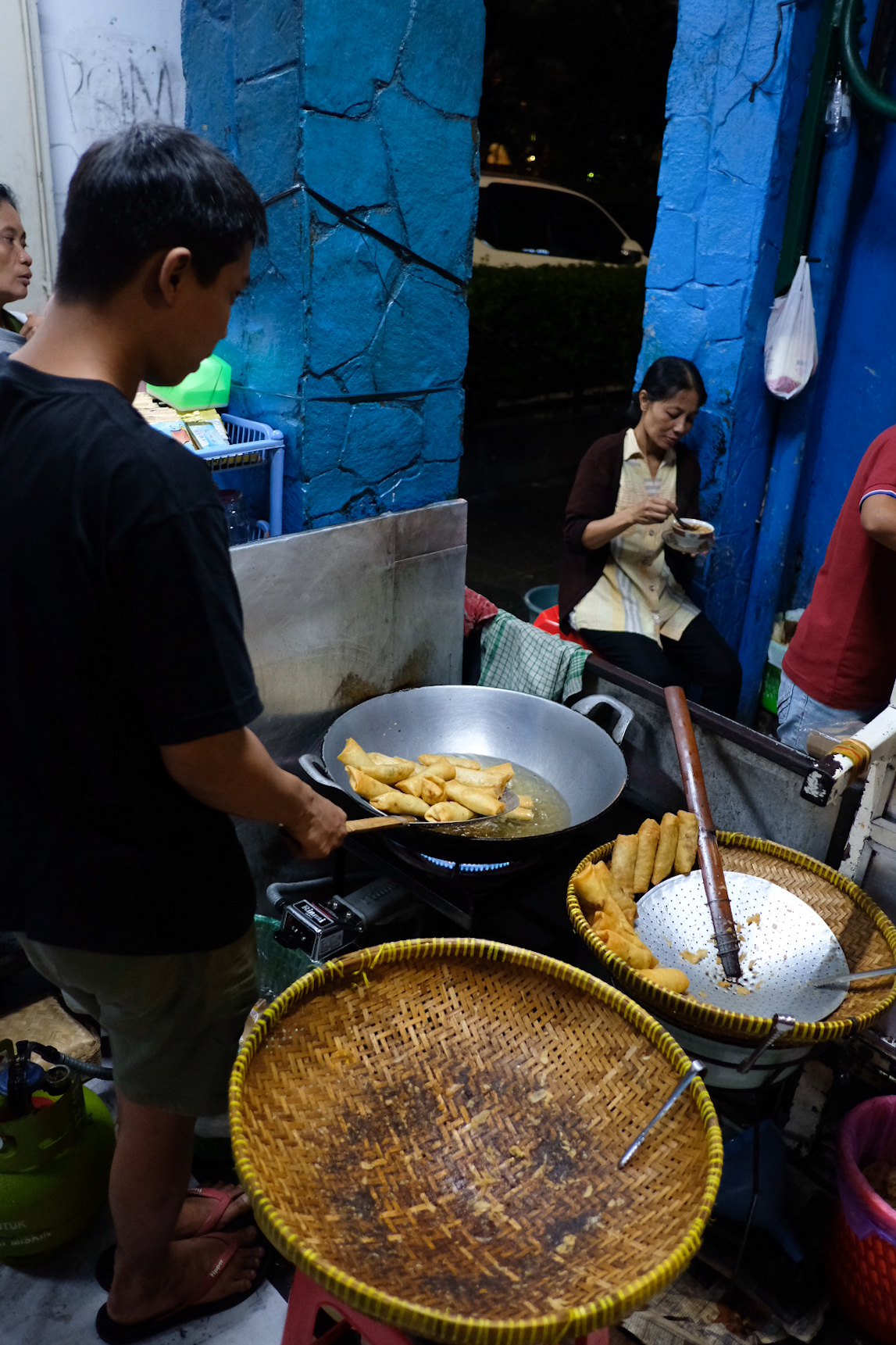 Yogyakarta is well known for 1 one dish in particular called Gudeg. This is jackfruit brazed in coconut and spices. It is eaten in combination with spicy cow skin, tahu, and rice. Very tasty once again, who would’ve guessed? 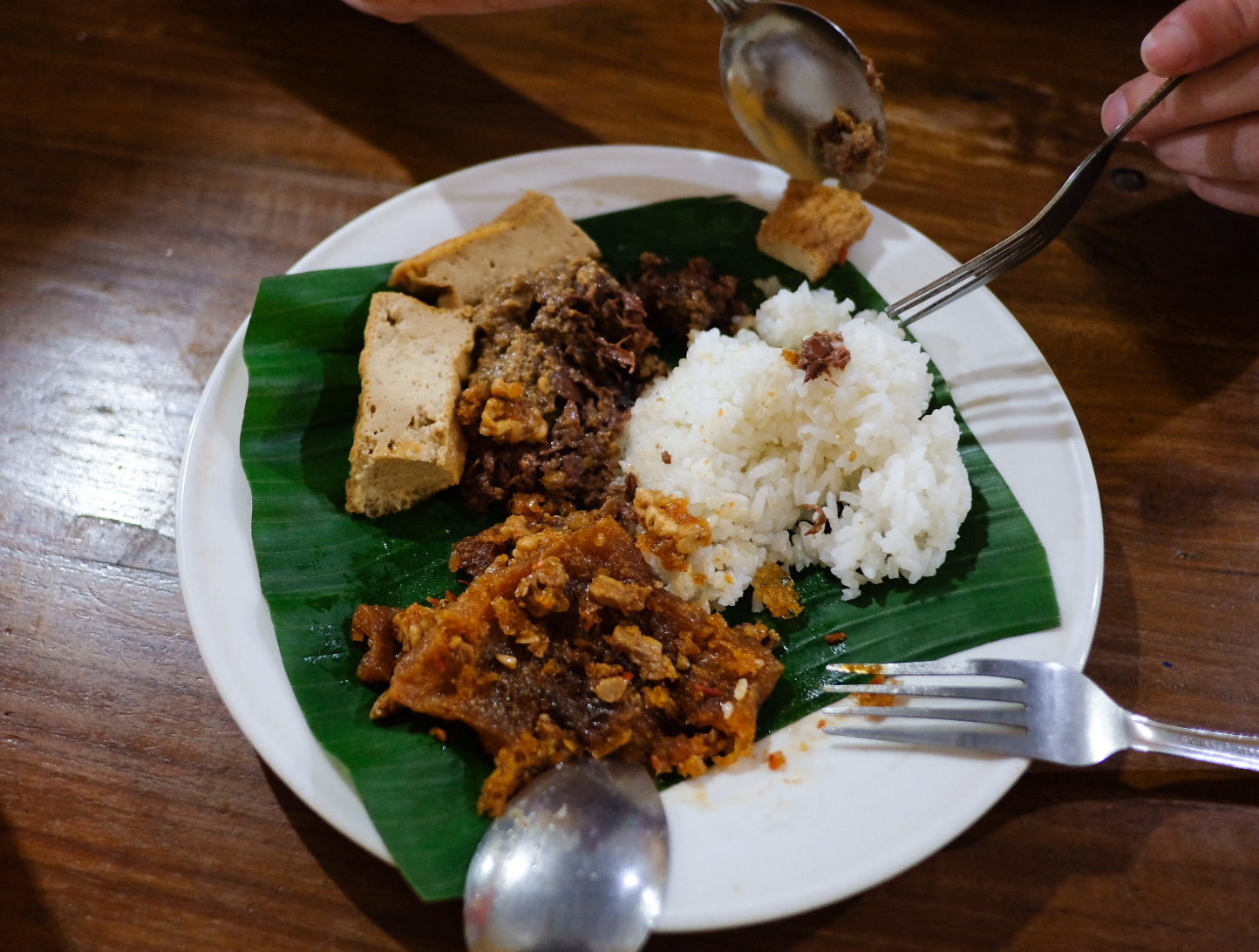 In Bali we have had some herbal drinks called Jamu, which consist of different spices depending on your ailments. We remembered them being, let’s say, not very pleasant. We were quite hesitant when our guide brought us to a place in Yogya specialized in these Jamu. Good thing for us that the ones we got served here were much more friendly to our tastebuds. There was one of them however which even the guide would not touch. It was bitter… very very bitter. Surprisingly Ellen could handle it and Tim didn’t. Guess that’s the opposite effect of spices. 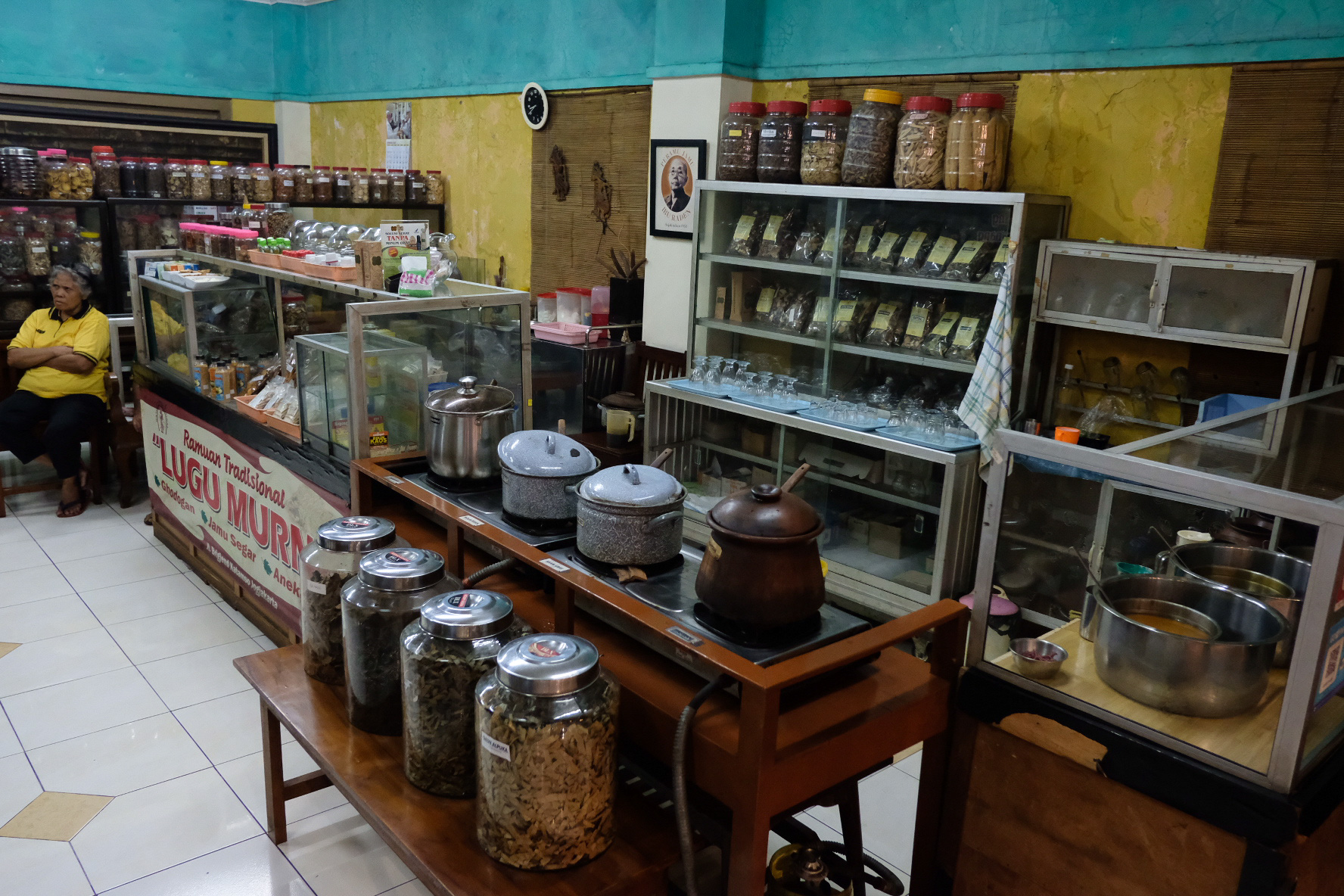 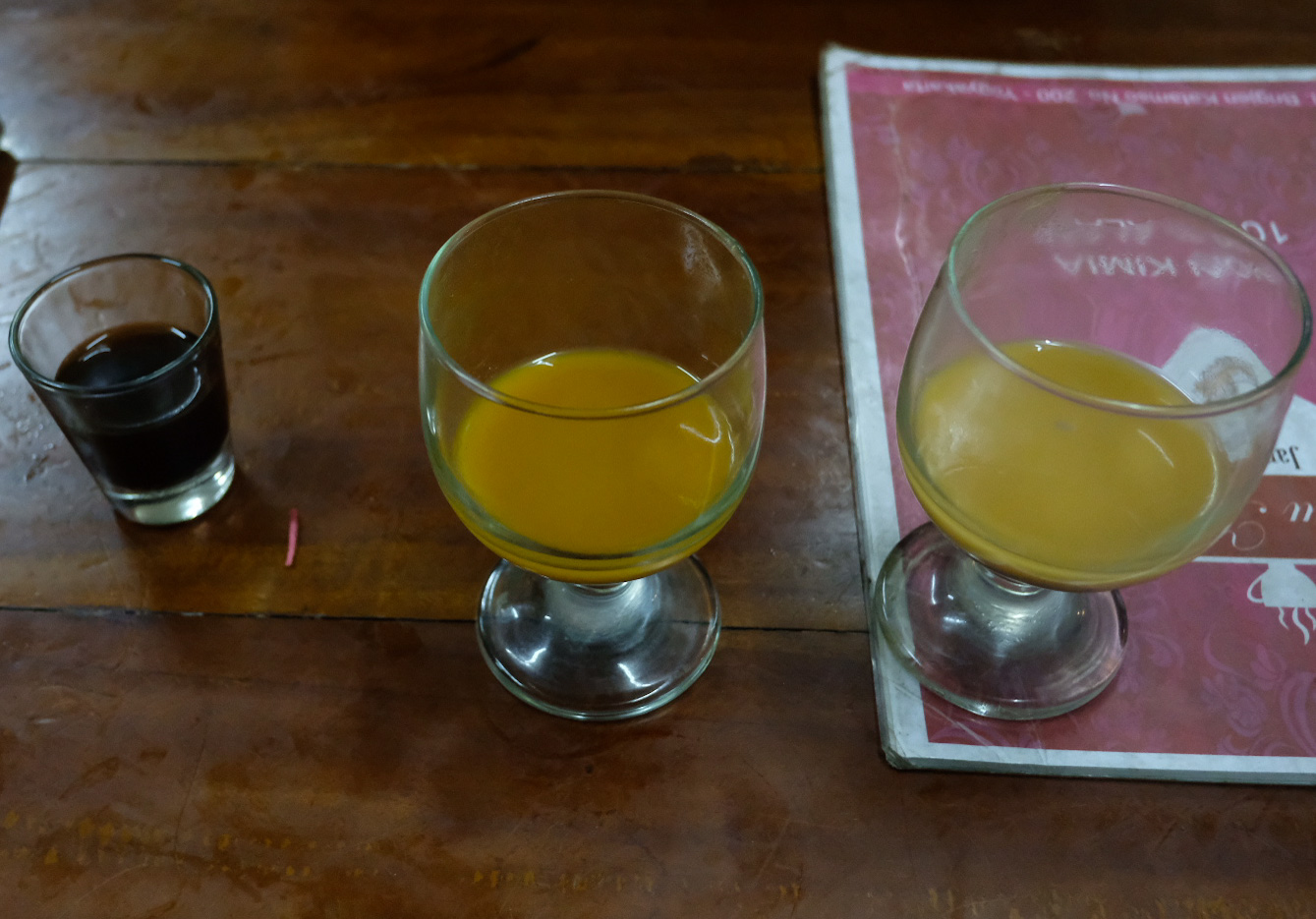 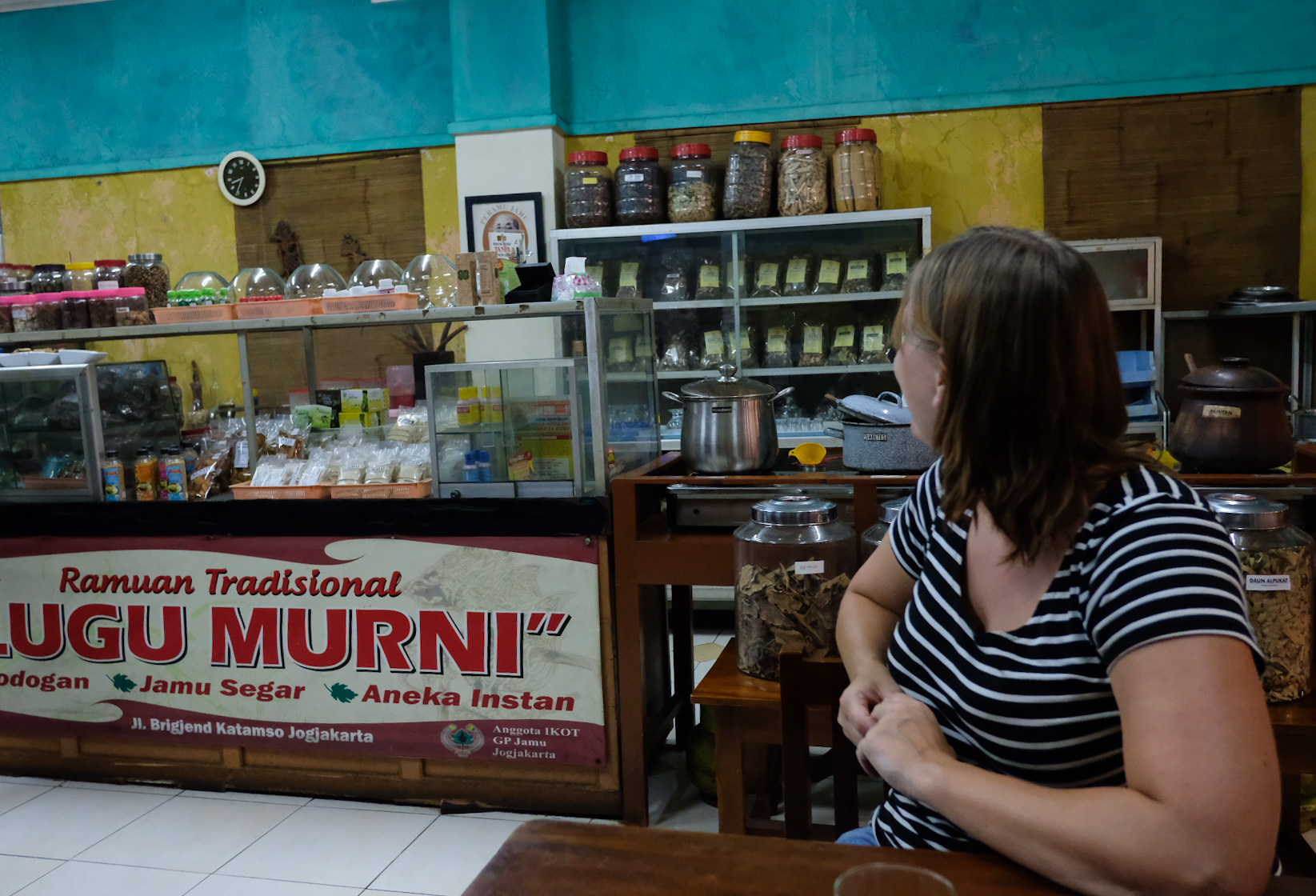 At this point we started to feel the amount of food we had thus far and the Jamu had an effect on Ellen. Sleepiness befell her, but we had one more place to go. This place served a very delicious dish called Bakmi. It’s a noodle dish served in a broth, together with a fried duck egg. Even though we were both stuffed, we finished the plate. It was so good! They also served a tea called “garbage tea”, a herbal tea called that way because all the herbs were still in the glass. It tasted sweet and had a nice touch of ginger and lemon grass. 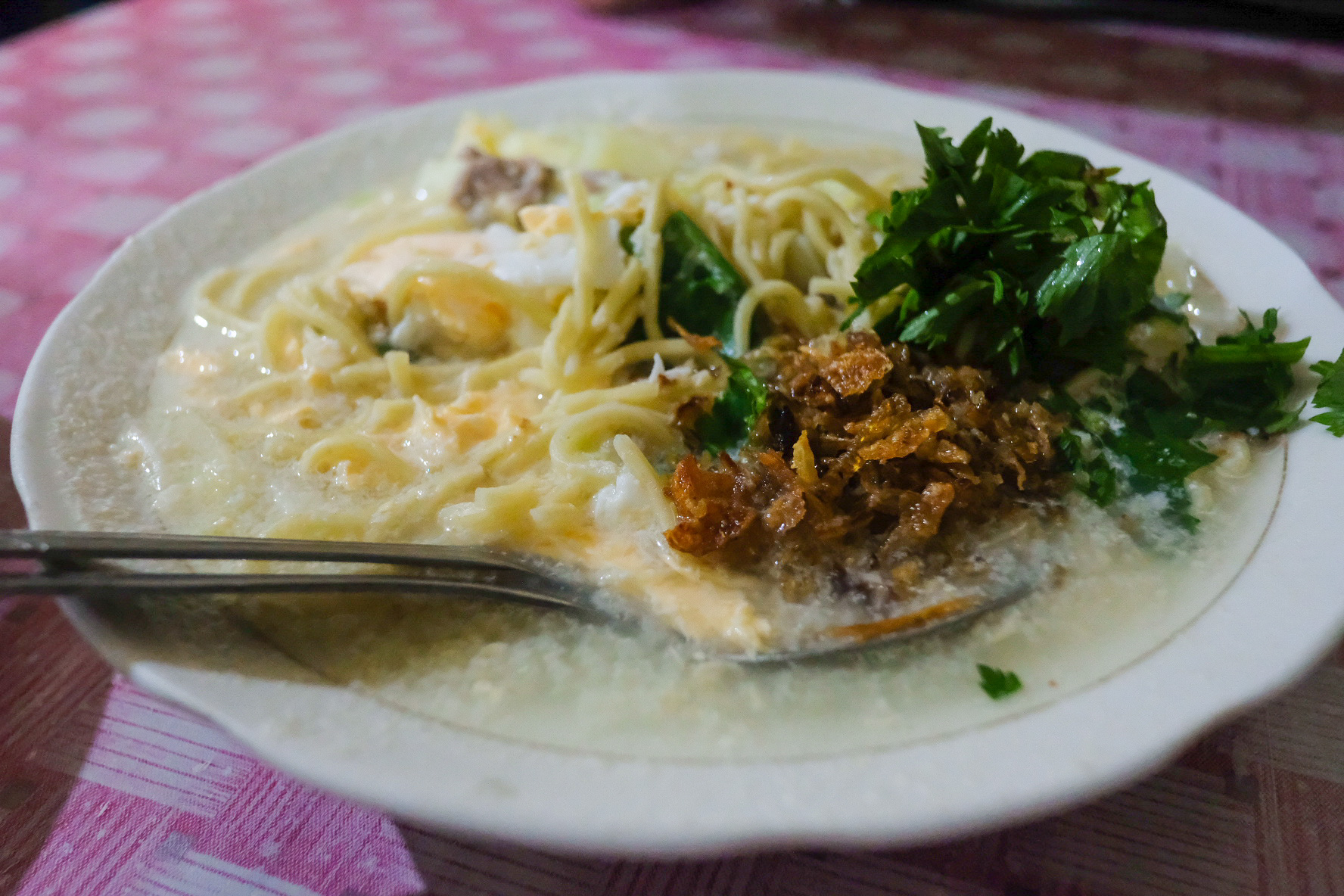 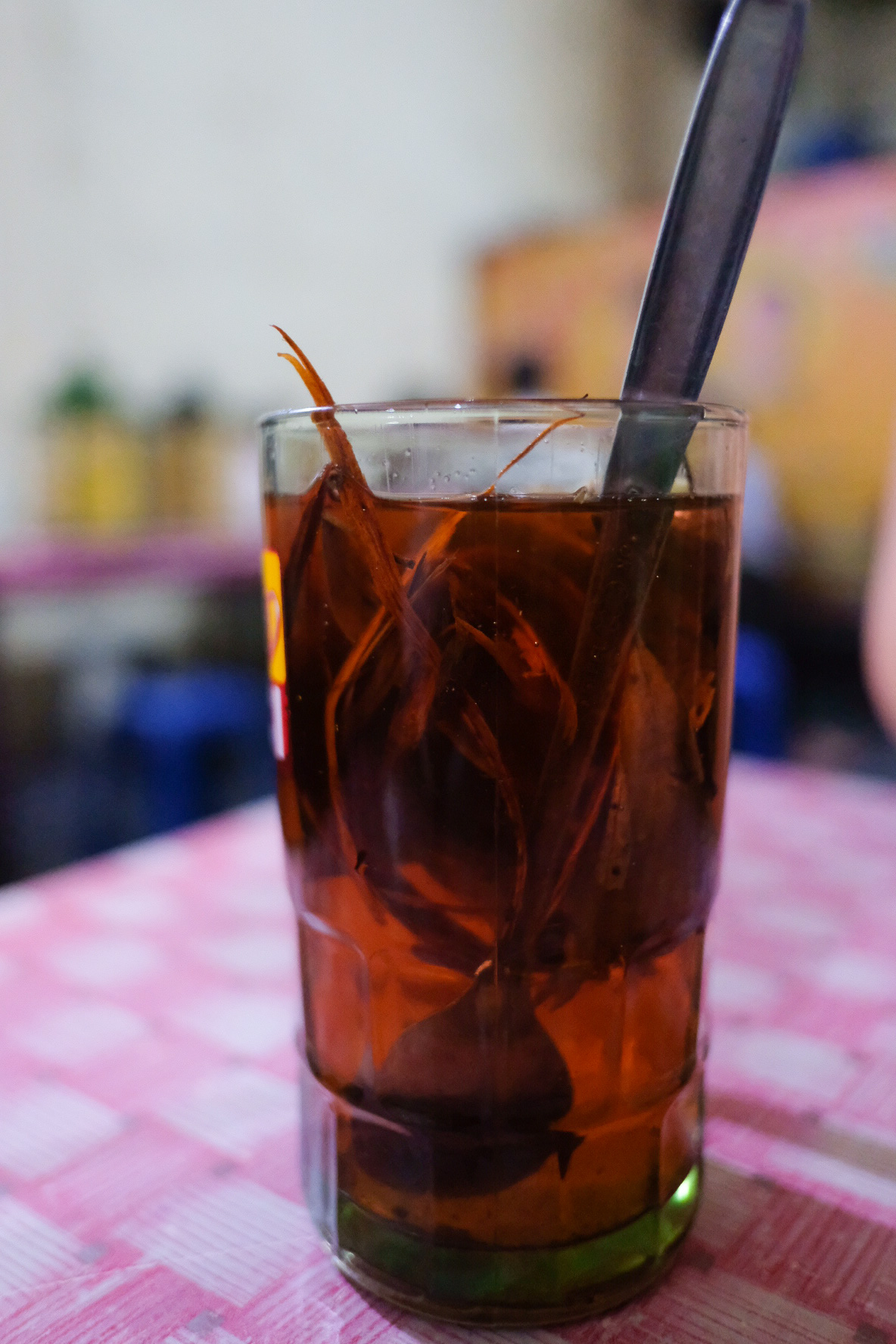 To conclude the night, our guide took us to a square where at night a lot of the locals, and tourists, gather for some fun and games. Here we were offered to drive around in a ridiculously lit paddle car. This car we chose had a large boom box playing loud gangster rap which added nicely to the ridiculousness of it all. We have fun paddling a while and after one more ginger tea we called it a night.

It was a very fun way to say goodbye to Yogyakarta. This city was amazing and it’s people were all so friendly and shared a great sense of humor. We did not want to leave but we had a train to catch. After a pretty relaxing 8 hour ride we arrived in Bandung. Here we will spend our last three nights in Indonesia as on Saturday we will fly to Kuala Lumpur! We can’t wait! See you later, love Ellen & Tim